Last weekend at New York Comic Con, Action Lab Entertainment announced they will be publishing my first comic book series, VORACIOUS. If you are family or a friend, you probably know that this is the project/labor of love I’ve been working on with my friend Jason Muhr for two years. Getting a publisher is a really big deal for any creative endeavor, but that’s especially true in the comics industry, which has taken over Hollywood and forced it’s way into the mainstream with a constant barrage of repulsor beams. To have the support of one of the fastest growing, most diverse publishers in comics right now is beyond anything I could have hoped for. I am pretty much over the moon.

So what the hell is VORACIOUS about anyway?

Thanks for asking. The quick pitch is that it’s about a time-traveling chef named Nate Willner who hunts dinosaurs in the past and serves them at his restaurant in the present! Think Jurassic Park meets Top Chef.

Here’s a pretty slide from the big announcement at Action Lab’s NYCC panel. 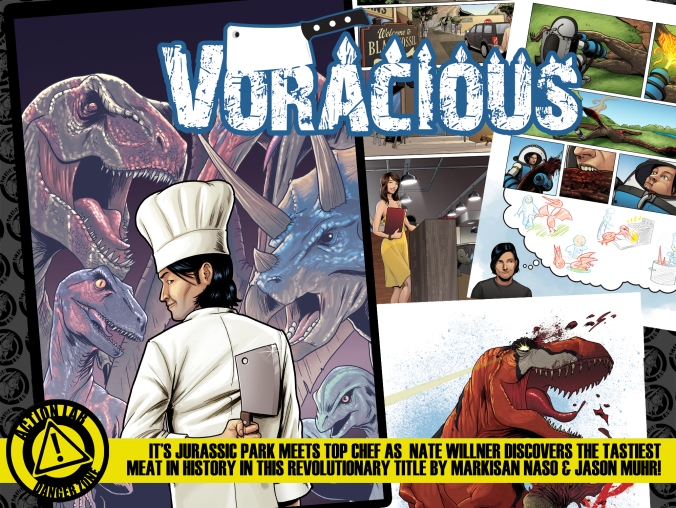 I can’t say a lot now, but as the release date gets closer we’ll be sharing more information and previews of the book. You can get the latest updates on Twitter at @VoraciousComic. Feel free to also follow me at @DarthSan and Jason at @JasonMuhr. Can’t wait to share all the deliciousness with you.